Johannesburg – Coronavirus lockdown measures in South Africa have limited young girls’ access to contraception and abortion, resulting in a surge in teenage pregnancies, Save the Children said on Tuesday.

The number of children born to teen mothers in Gauteng, South Africa’s most populous province, has increased by at least 60%  since the pandemic hit, the charity said in a statement, noting that over 930 of those mothers were younger than 14.

Overwhelmed clinics, school closures and stay-at-home laws rolled out since coronavirus reached South Africa in March 2020 have combined to make it difficult for teenagers to access sexual and reproductive health services.

More than 23 000 girls younger than 18 have given birth in Gauteng between April 2020 and March 2021, according to government figures cited by Save the Children, compared to 14 577 girls aged 19 and below during the same period the previous year.

“The global pandemic risks being a time of irreversible setbacks and lost progress for girls,” the charity’s national manager on health and nutrition, Marumo Sekgobela, said.

Meme battle: Mbalula claps back at Ndlozi… shows him in a bath towel

Mango employees’ salaries ‘to be paid in full’

“Unless we act fast and decisively, the impact on girls’ futures… will be devastating,” he added.

Teenage mothers are often stigmatised, forced to drop out of school and pushed into early marriage, the statement said. Their babies also have lower survival rates and likelier to be neglected, adding to the country’s social and economic costs in addition to the human consequences.

The charity urged the government to remove “barriers” accessing services and called on families, religious and traditional leaders to support teenagers’ rights to reproductive health.

South Africa’s health facilities are grappling with a third wave of coronavirus infections and a partial lockdown is still in place.

Schools have not resumed to full capacity, with students rotating between face-to-face and online lessons.

Gauteng is home to over 15 million people – a quarter of South Africa’s population – and includes both the administrative capital Pretoria and financial hub Johannesburg. 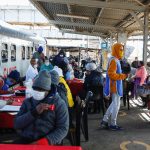