Freetown – Sierra Leone’s president has suspended the auditor general and her deputy, the presidency said on Friday, just weeks before her team was to unveil an audit of the government’s handling of public finances in 2020.

The presidency confirmed the suspension of Lara Taylor-Pearce and her deputy Tamba Momoh, without giving further details.

According to Sierra Leone law, the president has the power to hire and fire any public official.

Taylor-Pearce herself told local media she did not “know the reasons for my suspension”.

A tribunal will be set up to probe the two.

The suspension came just weeks before her office was due to present the annual audit to parliament.

“We have learnt with shock and dismay the unexplained suspension of Sierra Leone’s Auditor General Lara Taylor-Pearce,” the Institute for Governance Reform, a local civil society group, said in a statement.

“We urge the government to disclose the reasons for her suspension and take steps to speedily resolve this situation.”

The country of 7.6 million people is one of the poorest in the world and was ravaged by West Africa’s 2014-16 Ebola outbreak, which killed 4 000 people in the former British colony.

Corruption is prevalent in many aspects of society, especially in the aftermath of the 1991-2002 civil war.

The Sierra Leone Association of Journalists (SLAJ) also expressed concern over the suspension.

“The leadership of Lara Taylor-Pearce has a hitherto unblemished track record of professionalism and integrity in the discharge of its duties spanning over ten years and two political administrations,” it said.

It added that Sierra Leone had scored well on control of corruption in the Millennium Challenge Corporation’s (MCC) recent scorecard, which measures a raft of different indicators like rule of law and freedom of information.

The corporation was set up by the US government to promote economic growth and reduce poverty around the world.

“We regret that considering the recent impressive statistics on control of corruption in the just-released MCC Scorecard, this government can by this action seek to overturn all those gains in less than 24 hours,” the SLAJ said. 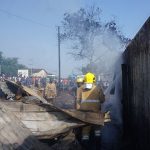