Cape Town – The National Council of Societies for the Prevention of Cruelty to Animals (NSPCA) has condemned music producer Mitchell We Gqom for releasing a song in the name of an Eastern Cape goat rapist named Mamboyi.

This followed a viral video clip of Mamboyi being confronted by villagers for raping goats.

In the video, Mamboyi was confronted by a group of angry women who accused him of raping a goat until it died.

Mamboyi admitted to the accusation and further took accountability of other goats that had died in his hands.

The video elicited shock on social media, but others reacted with humour.

Mitchell We Gqom capitalised on the humour by releasing a song called Mamboyi.

According to Times Live Mitchell We Gqom said that the song was to raise awareness about bestiality.

However, NSPCA was not pleased.

In a statement NSPCA condemned the producer.

“The NSPCA is disgusted and outraged by Mitchell we Gqom’s irresponsibility, apathy and lack of foresight in respect of the implications of his production. With his audience being the youth, his production exposes them to criminal acts with greater novelty. The NSPCA has seen an increase in child offenders in respect of sexual and violent crimes, with media such as this exacerbating an already inflamed problem,” said NSPCA.

The NSPCA further said that it is tracking down Mamboyi. 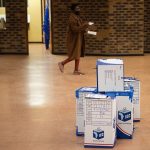