“Morocco has been consulted beforehand about this appointment and has already notified (UN chief) Antonio Guterres of its approval,” Omar Hilale said in an interview carried by state news agency MAP.

He said consultations were still underway but the Italian-Swedish diplomat’s appointment would be made public “in the upcoming days, after the endorsement of Security Council members”.

Several diplomatic sources at the UN said the Moroccan turnaround was due to “strong pressure” from the United States and France. It came after Morocco’s arch-rival Algeria, the main backer of the separatist Polisario Front had cut diplomatic ties with Morocco.

The Western Sahara dispute pits Morocco, which sees the former Spanish colony as an integral part of its territory, against the armed Polisario independence movement.

UN-led talks between the three parties plus Mauritania have been stalled since the 2019 resignation of the previous UN envoy, German diplomat Horst Kohler, for health reasons.

Guterres has put forward a dozen names for the role but has been unable to reach a consensus with all sides.

But the Polisario previously said it would accept the nomination of de Mistura, who has decades of diplomatic experience including as a UN envoy in Syria.

It did however question Morocco’s willingness to cooperate with the UN in the search for a lasting solution.

“No genuine, credible and viable peace process will ever be possible as long as the Moroccan occupation persists, with impunity, in its illegal actions and its attempts to impose by force a fait accompli in the occupied territories,” it said in a statement Wednesday.

Hilale said the diplomat would “be able to count on Morocco’s unfailing cooperation and support, to implement his mediation for the settlement of this regional dispute”.

In his letter to UNSG, @antonioguterres, President Ghali reaffirms that no peace process will ever be possible as long as the occupying state of #Morocco persists, with full impunity, in its terrorising and retaliatory war against #Sahrawi civilians and human rights activists. pic.twitter.com/Ym2RHfvGDd

Since a ceasefire with the Polisario in 1991, Morocco has controlled around 80 percent of the Western Sahara, where it has poured investment into development projects.

The Polisario continues to call for a referendum on self-determination, according to the 1991 UN-backed ceasefire deal.

Tensions rose sharply in November when Morocco sent troops into a buffer zone to reopen the only road leading from Morocco to Mauritania and the rest of West Africa, after the separatists had blocked it the previous month.

The Polisario responded by declaring the 1991 UN-backed ceasefire null and void.

The two sides have since exchanged regular fire along the demarcation line, though claims are difficult to independently verify in the hard-to-access area. 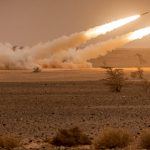 Morocco swelters in a record heatwave