Lome – Mali on Tuesday urged African organisations to lift the last sanctions they had imposed after the state underwent two military coups, declaring the country was well on track for restoring civilian rule.

The troubled Sahel state underwent a first military takeover in August 2020, which was followed by a second in May 2021.

African organisations responded by imposing sanctions over the delay to return to civilian rule. Some measures were lifted two months ago after the military promised a new timeframe for holding elections.

At talks in the Togolese capital Lome, Malian Foreign Minister Abdoulaye Diop said “one of the main priorities of the transition government remains the holding of free, transparent and credible elections, with a view to returning to peaceful and secure constitutional order within 24 months”, as from March 2022.

The government has shown “undeniable progress… commitment and clear determination to pursue this positive dynamic,” he told a high-level group on Mali set up by the African Union (AU).

As a result, this is “an unquestionable argument in favour of a positive assessment of our request for lifting the suspension of my country from the continental organisation”, Diop said, referring to the AU.

The AU and the Economic Community of West African States (ECOWAS) suspended Mali after the first coup, and repeated the suspension after the second coup, in which a civilian-led government was replaced by one appointed by the junta.

In January this year, ECOWAS imposed tough trade and financial sanctions against Mali.

These were lifted in July after Mali, yielding to ECOWAS demands, published a new electoral law and a timetable that includes a presidential election in February 2024.

However, ECOWAS has said Mali’s suspension will remain in place pending restoration of constitutional order.

The bloc’s sanctions imposed individually against around 150 members of the junta have also not been lifted.

Diop praised what he called “progressive normalisation” with ECOWAS but complained that the remaining sanctions were “obstacles.”

“The government of Mali calls for the lifting of these measures in order to promote full cooperation with all partners,” he said.

What next after Ecowas sanctions Mali? 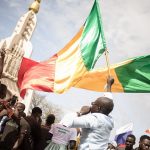 Malians out in force after junta calls protests over sanctions