Bamako – Fati Walet Mohamed Issa, a young documentary filmmaker from Mali’s volatile north, says her goal is to shine a light on the plight of women in the conflict-torn Sahel state.

“Women are often either taken out of school to get married, or they are not allowed to go to school,” the 24-year-old, wearing a tunic and a veil, tells AFP.

Mali is a conservative Muslim-majority nation of 21 million people, where swathes of the country are in the hands of jihadists, and pressure for women to conform to traditional gender roles is strong.

But Issa is uncowed.

She has recently finished shooting a 10-minute film in a Tuareg encampment in Timbuktu.

It and other pieces made by women have now had a screening in the historic city – a rarity indeed for female filmmakers in the remote northern region.

The documentary is entitled “Tamadjrezt” – “Regret” in the Tamasheq language of Issa’s Tuareg ethnic group.

“I want to talk about them, about us,” she says, referring to women.

In 2012, Tuareg separatists launched a rebellion in Mali’s desert north, which spiralled after it was commandeered by jihadists.

Islamist fighters have since spread to central Mali as well as neighbouring Burkina Faso and Niger.

Thousands of soldiers and civilians have been killed and two million people have been displaced by the Sahel-wide conflict, of which Mali remains the epicentre.

Issa explains that she shot her film alone, because “technical teams were afraid to come.”

Her documentary follows a 15-year-old girl named Fatma, whose family fled to neighbouring Mauritania because of the conflict but then returned home.

Fatma attended a school built of straw, which didn’t survive the torrential downpours of Mali’s rainy season. Despite her wishes, her father refused to allow to continue her schooling elsewhere.

“For us, women and girls have to take care of the home,” Fatma tells the camera.

Issa herself comes from the same traditional nomadic Tuareg background as Fatma, where education for girls is not deemed a priority.

The filmmaker herself fled to Mauritania and returned to Mali, and also had to pause her schooling because of the conflict.

But last year, Issa applied and was selected by an American NGO called Accountability Lab to make a short film about the status of women, which resulted in “Tamadjrezt”.

She screened it in mid-December, alongside nine other films commissioned by the NGO, which dealt taboo topics such as prostitution or domestic violence.

Zeina Mohamed Ali, a project manager at Accountability Lab, explained that the NGO wanted to give a voice to women, whom she said “are not listened to enough”.

At the film showing, dozens of people from the local community watched attentively.

“It inspired me,” Mariama Walet, a 28-year-old woman in the audience, said afterwards.

“It hurts me when I see how far behind we are in protecting women and girls”.

Issa, who has a young child, told AFP that her ambition is keep making films that speak to her community, and especially women and girls.

“People are too ruled by tradition here,” Issa said, adding that she had come to the realisation that films could teach people “something else”. 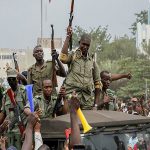