Cape Town – Limpopo education MEC, Mavhungu Lerule-Ramakhanya, has condemned an incident in which two pupils stabbed each other during a fight at Nngweni Secondary School in Nzhelele.

Both Grade 11 learners were taken to a local clinic after one of them sustained a cut to the hand and the other was stabbed in the shoulder.

The matter was reported to the police.

The two, who were in the same class, allegedly brought a knife and an axe to the school premises, the department said in a statement.

Lerule-Ramakhanya raised her concerns about school violence, especially with the matriculants busy with their preparatory examinations.

She also called on parents, teachers, communities, and law enforcement agencies to assist her department to ensure the province provided its learners with an environment that was conducive for teaching and learning.

“I want to make a plea to parents, teachers and all the interested stakeholders to ensure that our schools remain a place of learning. I am disturbed by the report of learners who stabbed each other with dangerous weapons that are not permitted in our school premises,.

“The incident happened in the middle of matric preliminary examinations, and it will surely have a negative impact on the learners writing in that particular school,” said Lerule-Ramakhanya.

The MEC was set to convene a seminar to address bullying, gangsterism and in-school violence next month to seek ways to address the challenges faced by schools. 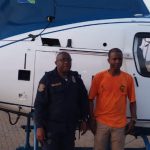