Nairobi – More than 300 aid trucks arrived in Tigray from May 10-16, the highest number to reach the impoverished and war-torn region of northern Ethiopia in almost a year, the United Nations said on Friday.

The conflict erupted late 2020 when the government sent troops in to topple Tigray’s ruling TPLF party, saying it was in response to rebel attacks on army camps.

Hundreds of thousands have been driven to the brink of famine, more than two million people been displaced and more than nine million left in need of food aid, the UN says.

“319 trucks of humanitarian cargo entered Tigray during the reporting week, the highest number of trucks entering the region in a single week since June 2021,” the UN humanitarian agency OCHA reported.

“In total, 571 trucks have arrived in (the regional capital) Mekele making a total of nine humanitarian convoys since the resumption of convoy movement on 1 April, following an interruption of more than three months,” OCHA said.

From April to mid-May some 15 500 tonnes of food have entered Tigray through the neighbouring Afar region, the statement said.

“At least 68,000 metric tonnes are still required to complete the current food distribution cycle,” it added, noting that seed and fertiliser was needed urgently with the sowing season approaching.

Ethiopia’s north was “generally calm” but still “tense” and “unpredictable, the agency said.

In March, the government declared “an indefinite humanitarian truce effective immediately”, which allowed several convoys of humanitarian aid to reach the region for the first time since mid-December.

The UN previously blamed both sides for a “de facto humanitarian blockade”.

ICRC resumes aid by road to Tigray after six months 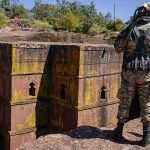