Kenya – Human Rights Watch has decried the Kenyan government’s response to a surge in gender-based violence (GBV) that took place throughout the coronavirus pandemic, specifically during periods of lockdown.

In a new report released on Tuesday, the US-based rights group claimed the government failed to ensure that health, economic and social support services were available to women amid restrictions that affected their mobility.

In doing so, HRW said the Kenyan government actually facilitated an increase in GBV. The report says there was a staggering 301% increase in calls reporting violence against women and girls in the first two weeks of the lockdown between March and April 2020.

While previous studies have shown that cases of GBV increase during health emergencies, the Kenyan government should have “expected and planned for a similar uptick during the COVID-19 health emergency”, HRW said.

Other research on sexual violence and GBV has also shown that Kenya’s current government structures and policies are “inadequate to respond effectively to violence against women and girls” during such emergencies, it added.

The #COVID19 pandemic is not the first time #Kenya has witnessed increases in violence against women and girls during crises. The government, as in the past, turned a blind eye and failed to protect women and girls against violence. https://t.co/oqxx944MAh pic.twitter.com/Y51tRfP99f

The report is based on 26 interviews conducted between June 2020 and February 2021 – 13 of whom were survivors of GBV.

The group documented various forms of violence against women and girls – including sexual abuse, beatings, being thrown out of the home, being forced to marry, and being forced to undergo female genital mutilation (FGM).

According to the report, many of the abuses happened “in the home” and attackers were “close family members including husbands, but other abuses happened in the communities perpetuated by neighbours”.

The girls interviewed said they experienced ongoing sexual harassment from men in their communities, some of whom “lured them” with gifts of food or sanitary pads.

In one case, Juliet, a 16-year-old girl living in an informal settlement in Nairobi, was held captive for four days by a man who sexually assaulted her, HRW said. She was eventually rescued by neighbours and cared for in a safe house in Nairobi.

Despite already having high levels of violence, there is a “clear trend” of increased violence against women and girls in Kenya, HRW said.

In the midst of a surge in gender-based violence during the pandemic in Kenya – and gaps in government response – activists like Gladys ensured women & girls have had somewhere to go.
Read about activists’ efforts here, new @hrw report: https://t.co/3iltR3Osph pic.twitter.com/oV4e06WJGF

Kenyan police and other state security agents have been “key perpetrators” of serious human rights violations and have been involved in many cases of “rape and other sexual violence against women and girls, and men and boys, particularly during times of crisis”, the group said.

While very few have faced justice, HRW’s findings indicate that police officers regularly demand bribes to carry out the basic functions of their job.

HRW’s findings also indicate that despite the creation of gender desks in police stations, officers have “stigmatised” GBV survivors and lack adequate training to deal with such cases – preventing victims from seeking justice.

In its report, HRW called on the Kenyan government to “prevent, tackle, and redress” violence against women and girls, including during times of crisis. 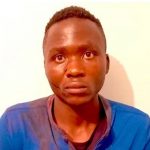