Cape Town – Police in Gauteng arrested two suspected illegal miners for murder and 10 others for assault with intent to cause grievous bodily harm in Randfontein on Tuesday.

A  police statement said officers were conducting an operation on illegal mining when they were called to a vigilantism attack scene at Bhongweni in Randfontein.

“A preliminary investigation revealed that the two victims were accused of shooting and killing another illegal miner in the early hours of the morning. Police arrested all 12 suspects and charged two with murder and 10 with assault with intent to cause grievous bodily harm,” said Masondo.

He said that the suspects will be processed by the Department of Home Affairs officials, as they were reportedly undocumented immigrants. 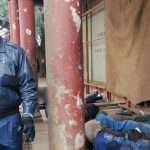 46 arrested, one shot dead as cops seize tonnes of gold-bearing material from illegal miners in SA