Nairobi – The Ethiopian Human Rights Commission (EHRC) said on Sunday that government forces were responsible for burning a Tigrayan man to death, a barbaric act circulated in a widely-shared video that sparked outrage on social media.

Ethiopia’s government on Saturday vowed to investigate and take action against anyone involved in “the extremely savage act” depicted in the video, which shows an unarmed man being set on fire as a group of people, including some wearing army uniforms, taunt him.

On Sunday, the EHRC said the victim was a Tigrayan man who was “burnt alive… with the participation of government security forces and other people”.

The atrocity occurred on March 3 in the northwestern region of Benishangul Gumuz, which borders Sudan and South Sudan. It followed an attack a day earlier that left at least 20 people dead, the state-affiliated independent rights body said.

“The bodies of the deceased were taken by security forces to a nearby forest and burned,” the EHRC said in a statement, citing eyewitness testimony.

“Those who were in the area were Ethiopian army soldiers, Amhara region special police forces and Southern region police forces,” the rights body said, calling for a criminal investigation.

The video could not be independently verified by AFP and it was not immediately clear if the atrocity was connected to the ongoing 16-month war in northern Ethiopia.

The conflict between government forces and Tigrayan rebels in Africa’s second most populous country has killed thousands of people. There are widespread reports of atrocities, including mass killings and sexual violence.

The Oromo Liberation Army (OLA), which has allied with the Tigrayan rebels, accused Prime Minister Abiy Ahmed and his Prosperity Party of encouraging the “Stone Age savagery” on display in the video.

“The atrocious act we are subjected to stems directly from the wicked rhetoric” deployed by Abiy’s party and its allies, the OLA said in a statement released Saturday.

According to the UN, the fighting has displaced more than two million people, driven hundreds of thousands to the brink of starvation and left more than nine million in need of assistance.

Earlier this month, the UN Human Rights Council announced that Fatou Bensouda, a former chief prosecutor at the International Criminal Court (ICC), would head a UN investigation into a wide range of alleged violations committed by all sides in the war. 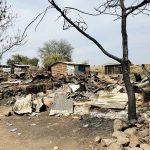