Kinshasa – A senior army commander in the Democratic Republic of Congo heading military operations against the M23 rebel group in the country’s east has been arrested, local media and an army source said Tuesday.

Lieutenant-General Philemon Yav Irung has been in prison in the capital Kinshasa since Monday, according to a report by Radio Okapi.

Irung has commanded the DRC’s military operations against the M23 militia in eastern North Kivu province since mid-July.

A mostly Congolese Tutsi group, the M23 first leapt to prominence in 2012 when it briefly captured North Kivu’s capital Goma before being driven out.

The rebel group resumed fighting in late 2021 after lying dormant for years, and has since captured swathes of territory in North Kivu, including the strategic town of Bunagana on the Ugandan border.

The circumstances of Irung’s arrest are hazy. An army source confirmed his arrest to AFP but declined to offer further details.

Irung’s arrest also comes shortly after another army officer in North Kivu was arrested and imprisoned in Goma.

The officer is suspected of having poisoned the province’s ranking general Ghislain Tshinkobo, who died last month in what was initially reported as a heart attack, according to an army source who requested anonymity.

Relations between the DRC and Rwanda have plunged since the resurgence of the M23. Kinshasa has accused its smaller central African neighbour of backing the insurgency, but Rwanda has repeatedly denied the claims. 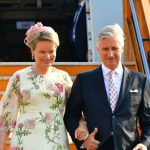