Mombasa – China’s foreign minister Wang Yi announced on Thursday that Beijing would appoint a special envoy to the Horn of Africa, signalling his country’s intention to play a greater role in the conflict-torn region.

The announcement came as a US envoy was due to arrive in Ethiopia to encourage talks to end more than a year of war in the country’s north.

Wang, on a three-nation tour of Africa, said China wanted to encourage dialogue to overcome peace and security challenges plaguing the Horn.

“China will appoint a special envoy of the Chinese foreign ministry,” he told reporters in the Kenyan port city of Mombasa.

“We will continue to play even a bigger role for peace and stability in the region,” he said, speaking through an interpreter.

Wang’s visit to Eritrea, Kenya and the Comoros comes on the heels of a trip to Africa by US Secretary of State Antony Blinken in November that was in part aimed at countering China’s growing influence on the continent.

It also coincides with a return visit to Ethiopia by Jeffrey Feltman, the US special envoy for the Horn, who is expected to arrive in Addis Ababa on Thursday.

The State Department says Feltman, who is soon expected to stand down from the role, will try again to nudge the warring parties to the negotiation table amid a lull in fighting.

Rebels who were feared to be planning a march on Addis Ababa have withdrawn to their stronghold in Tigray, and the government says the military will not pursue them.

Feltman’s trip comes after the United States angered Ethiopia by removing trading privileges for the longtime ally due to human rights concerns during the war.

Washington also slapped sanctions on Eritrea last year over its involvement in the Ethiopia conflict, which has killed thousands of people and created a deep humanitarian crisis.

Washington has demanded Asmara withdraw its troops from Ethiopia’s war-hit Tigray, where soldiers from both sides have been accused of raping and massacring civilians.

During his visit to Eritrea on Wednesday, Wang voiced China’s opposition to unilateral sanctions on the secretive state and foreign interference in the “affairs of other countries under the pretext of democracy and human rights”. 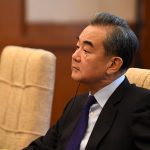