Cape Town – Former president Jacob Zuma has reportedly threatened to call for a private prosecution of Advocate Billy Downer, just a day before the start of his corruption trial.

According to EWN, this followed failed legal challenges against Downer who he insisted would be biased against him if allowed to continue as lead prosecutor in the case.

Zuma wanted Downer to recuse himself for allegedly sharing confidential medical information with the media. He argued that Downer was neither independent nor impartial.

However, High Court judge Piet Koen maintained early this year, that Downer had no conflicts of interest, calling Zuma’s claims “frivolous, absurd… and devoid of any prospects of success”.

According to News24, Jacob Zuma Foundation spokesperson Mzwanele Manyi said at a media briefing in Sandton on Sunday: “The instruction will now be put into operation in the next few days. [Former] president Zuma has decided that the only way to deal with Downer is through private prosecution, so wheels are being set in motion to see to it that a private prosecution happens.”

Zuma is scheduled to appear in the high court in Pietermaritzburg on Monday.

His foundation confirmed that he would be present at court on Monday and, through his legal team, would respond to the affidavit “in which they seek to introduce new evidence on the events of the last few days”, Times Live reported.

Manyi denied allegations that Zuma was using delay tactics to stall the case.

“All Zuma wants is his day in court in a fair trial, not one like this that has all the hallmarks of being rigged by the state. And we trust that all the previous unfair and incorrect court decisions taken along the way will be rectified by higher courts.

“We hold the view that the day that all are equal before the law has not yet come, and Zuma has been treated unfairly. He is applying for a postponement only because the conditions for fair trial are not evident,” the report quoted Manyi as saying.

He is accused of taking bribes from French defence giant Thales, which has also been charged with corruption and money laundering.

Both have denied any wrongdoing. 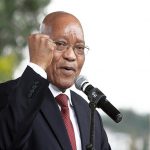