More than 60 migrants of sub-Saharan origin have been lost at sea off Tunisia since Saturday, after two Europe-bound vessels sank, local authorities and the Red Crescent have said.

Tunis – More than 60 migrants of sub-Saharan origin have been lost at sea off Tunisia since Saturday, after two Europe-bound vessels sank, local authorities and the Red Crescent have said.

Tunisia and neighbouring Libya are key departure points for migrants who attempt the dangerous crossing from the North African coast to Europe, particularly Italy.

So far this year more than 880 migrants have died trying to reach Europe from North Africa, according to the International Organisation for Migration.

The body of a #child and a woman among 14 people drowned in the #Mediterranean Sea off Libya washed ashore in Zawya, northwestern #Libya. On another incident today, at least 43 migrants drown in shipwreck off Tunisia, said @AbdulkadirMusse, Special Representative to Libya. pic.twitter.com/vUEeXZMayj

Since the start of the summer the number of crossings have increased as migrants take advantage of the good weather and calmer seas, but the numbers of those lost at sea has also risen.

The Tunisian coastguard retrieved the bodies of 21 migrants after their boat was shipwrecked on Sunday off the port city of Sfax, authorities said on Monday.

“Twenty-one bodies of migrants were recovered after their boat was shipwrecked on July 4, and 50 were rescued” off Sfax, National Guard spokesperson Houcem Eddine Jebabli told AFP Monday.

He said the migrants, all from sub-Saharan Africa, had been trying to reach Europe.

On Saturday, the Tunisian Red Crescent had reported that 43 migrants were missing when a boat carrying more than 120 sunk off the southeastern coast in waters near Zarzis.

Tunisia’s defence ministry said eighty-four were rescued from that stricken vessel, which the Red Crescent said had set off from Libya’s coast.

The National Guard said Monday four boatloads of migrants had sunk since June 26 after setting off from Sfax, with the bodies of 49 people recovered and 78 rescued.

The number of migrants departing Tunisia for European shores last year hit its highest level since 2011.

During the first quarter of 2021, more than half of those arriving in Italy from Tunisia were citizens from sub-Saharan African countries, according to the Tunisian rights organisation FTDES.

The number of migrants attempting to cross from neighbouring Libya rocketed to 11 000 between January and April this year, according to UN refugee agency UNHCR.

The UNHCR says that “deteriorating” conditions of migrants in Libya and Tunisia are pushing many to risk the crossing.

A UN Human Rights Office report in late May urged Libya and the European Union to overhaul their search and rescue operations in the Mediterranean.

It found that existing policies “fail to prioritise the lives, safety and human rights” of people attempting to cross from Africa to Europe. 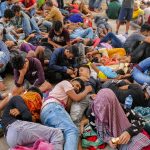