Nigerian separatists are demanding “justice and fair hearing” after their leader Nnamdi Kanu was detained after he was brought back to the west African country to face trial.

Lagos – A group seeking a separate homeland for the ethnic Igbo people of Nigeria’s southeast demanded ‘justice and fair hearing’ on Wednesday, after their leader Nnamdi Kanu was detained.

The head of the Indigenous People of Biafra (IPOB) was arrested and brought back to Nigeria to face trial, the authorities announced Tuesday.

The 53-year-old had jumped bail in 2017 and disappeared, only to reappear in Israel and Britain. It was not immediately clear where he was arrested.

A spokesperson at the British High Commission in Nigeria’s capital Abuja said “Kanu was not arrested in the UK for extradition purposes.”

JUST IN: Memo To IPOB Worldwide Family On The Abduction Of Mazi Nnamdi Kanu, The Leader Of The Indigenous People Of Biafra (IPOB) By The Head Of IPOB Directorate Of State (DOS) @cedoziemm. pic.twitter.com/gFe2quRetP

Kanu was arraigned in a federal high court on Tuesday and remanded in custody pending his trial in July.

IPOB, founded by Kanu in 2013, called on Wednesday for a fair hearing for its leader.

“We remind the Nigeria government and her security agencies that our leader deserves justice and fair hearing,” IPOB spokesperson Emma Powerful said in a statement.

“We also want to state unequivocally, that no harm should befall our leader. Should anything untoward happen to him, Nigeria Government will be held accountable for it.”

IPOB added that it would “not relent in the pursuit of Biafra freedom.”

Calls for a separate state of Biafra are a sensitive subject in Nigeria, after a unilateral declaration of independence in 1967 sparked a brutal 30-month civil war.

More than one million people died, most of them Igbos, from the effects of conflict and disease.

The outlawed group has been accused of recent violence against security personnel and facilities in southeast Nigeria.

Some 130 security officials, mostly police, have been killed while dozens of electoral offices have been burnt and materials destroyed.

IPOB has denied the charges. 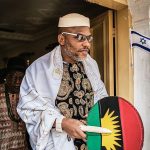