The latest killings bring to 60 the death toll in a security clampdown since the October 25 military takeover, said the Central Committee of Sudan Doctors, which is part of the pro-democracy movement.

One of the slain demonstrators took a “live bullet to the head by the putschist forces as he took part in demonstrations” in the capital’s twin city of Omdurman, the doctors said.

The second, who also has not been identified, “was hit by a live bullet to the pelvis” during the Omdurman protests while the third was killed in North Khartoum due to “live bullets to the chest,” they added.

The medics also counted more than 300 wounded including by live rounds, rubber bullets, and other injuries due to the persistent firing of tear gas.

Their deaths came a day after US Secretary of State Antony Blinken appealed on Twitter for Sudanese security forces to “cease using lethal force against demonstrators”.

Singing, beating drums, and holding up posters of others killed in demonstrations since the military takeover, protesters in the capital Khartoum shouted defiant slogans against the army.

Many protesters in Khartoum were seen wounded and struggling with breathing difficulties due to the heavy firing of tear gas, according to the witnesses.

Demonstrators remain undeterred by the risks, which on November 17 saw 15 protesters shot dead in the bloodiest day so far.

“We will not stop until we get our country back,” shouted one protester, Samar al-Tayeb, 22.

Other demonstrators set fire to tyres to create burning barricades on the streets.

Crowds were marching towards the presidential palace in Khartoum when security forces fired volleys of tear gas that formed thick and choking clouds, witnesses said.

Protesters hurled back stones at security forces, they added.

“Our marches will continue until we restore our revolution and our civilian government, even if martyrs fall among us,” said Mojataba Hussein, a 23-year-old protester.

The power grab by military chief General Abdel Fattah al-Burhan was one of several in Sudan’s post-independence history. It dismantled a precarious power-sharing arrangement between the military and civilians established in the wake of the April 2019 ouster of longtime autocrat Omar al-Bashir.

The protests on Thursday came days after prime minister Abdalla Hamdok resigned, leaving the military fully in charge. Hamdok had been held under house arrest for weeks following the coup, before being reinstated in a November 21 deal after international pressure.

The protest movement called the November pact a “betrayal” for providing what they said was a cloak of legitimacy for Burhan’s coup, and kept up its rallies.

When Hamdok stepped down on Sunday, he said Sudan was at a “dangerous crossroads threatening its very survival”.

Western nations say the solution is dialogue, a point made in a tweet Wednesday by Blinken who urged “an immediate, Sudanese-led, and internationally facilitated dialogue.”

Demonstrations on Thursday again took place in other cities as well as the capital, witnesses said.

“The authority is that of the people,” protesters chanted in Wad Madani, demanding soldiers “go back to the barracks”.

In Atbara, protesters called on Burhan to “hand over the country’s keys and leave,” witnesses said.

Crowds in the central state of North Kordofan chanted “No, no to military rule” while waving and draped in the national flag.

Others took to the streets in Central and South Darfur states, according to witnesses.

On Tuesday the United States, European Union, Britain and Norway warned the military against naming their own successor to Hamdok, saying that without involvement of “a broad range of civilian stakeholders” such a move could plunge the country into conflict.

On Thursday, state-media quoted Burhan’s media adviser Taher Abouhaga as saying, in an apparent reference to the absence of a government: “The void must be filled in the least possible time.”

Web monitoring group NetBlocks said the mobile internet was cut from mid-morning Thursday, and wider internet access and phone lines were also disrupted, a tactic repeatedly used in an attempt to disrupt activists. 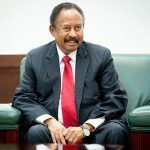 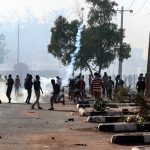