Johannesburg – Springbok fly-half Elton Jantjies was sent home from Argentina ahead of a Rugby Championship match, the South African Rugby Union said on Sunday, after media reports about an affair with the team’s dietician.

“The Springbok management are aware of reports regarding Springbok fly-half Elton Jantjies and team dietician Zeenat Simjee,” SA Rugby said in a statement.

“No team protocols were breached, but the individuals are returning to South Africa to attend to these personal reports and to eliminate any distractions to the team’s preparations for the Test against Argentina.”

The Springboks are due to play Argentina on September 17 in the Rugby Championship.

South Africa are currently tied on points (9) in second place with Australia and Argentina, with all three teams trailing New Zealand who lead with 10 points.

South African media reported Jantjies, who is married, spent time at a guesthouse with a woman last month, as the team was in Mbombela, South Africa, to play New Zealand.

Jantjies, 32, is not new to making news off the pitch.

In May he was arrested on charges of malicious damage to property of an airline he had flown with from Dubai to Johannesburg.

The case against him was provisionally withdrawn in June. 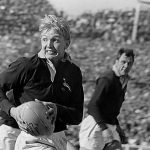