He, however, according to Times Live, said he was willing to do so in the presence of his legal counsel or a family member.

Agrizzi failed to appear in court on Tuesday, citing ill health, prompting a warrant of arrest to be issued by the Palm Ridge Specialised Crimes Court.

The National Prosecuting Authority (NPA) announced that it would perform its own medical evaluation on Agrizzi after he appeared on a television show in September despite a medical report from his team saying he was not fit for trial, the report said.

According to IOL, Agrizzi’s lawyer, Mannie Witz, told the court at the time that his client was permanently reliant on oxygen and was confined to his home except when he had to report at the police station on Fridays.

“His medical condition is unfortunately not good, to keep alive he relies on oxygen and a cocktail of medication that he takes twice a day,” the report quoted Witz as saying at the time.

The Court granted the State request to use its own doctor to examine Agrizzi and postponed the matter to December 2, 2021.

He stands accused of offering gratification on behalf of Bosasa to former member of Parliament and African National Congress (ANC) member Vincent Smith in exchange for his influence, as the then chairperson of Parliament’s oversight committee on Correctional Services. 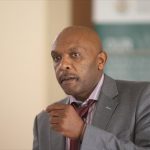