The latest situation report from the agency comes one week after Ethiopia expelled seven senior UN officials over accusations of “meddling”, exacerbating concerns about the humanitarian response in a region where hundreds of thousands reportedly face famine-like conditions.

While 80 aid trucks reached Tigray during the week ending Tuesday, badly needed medical supplies “were not allowed”, the report by the United Nations Office for the Coordination of Humanitarian Affairs (OCHA) said.

“The health situation is of particular concern due to lack of medicine and medical equipment,” it said.

At Ayder Referral Hospital in Tigray’s capital Mekele, the region’s biggest, 18 people including one child died because there were no haemodialysis catheters, OCHA said.

“The lives of 34 patients are at risk unless dialysis supplies are not provided immediately.”

The hospital also does not have a working oxygen machine and the necessary spare parts are not available in Tigray.

The report also cited five deaths in Selwa district in southern Tigray due to “lack of health care” to treat post-partum haemorrhage.

Persistent fuel and cash shortages are also an issue, forcing aid groups to drastically slash support for health facilities and displacement sites throughout the region.

And as fears grow of widespread starvation deaths, hospitals outside Mekele including in the towns of Hawzen, Axum and Adigrat “have run out of nutrition therapeutic supplies to treat severe malnutrition cases among young children”.

Though government forces quickly took control of Tigray’s cities and towns, the TPLF recaptured most of the region including Mekele by late June.

Abiy’s office then announced a humanitarian ceasefire, yet very little aid has gone in.

But the US State Department told AFP last month that access to essential supplies and services was “being denied by the Ethiopian government” and that there were “indications of a siege”.

At a meeting of the Security Council Wednesday, UN Secretary-General Antonio Guterres demanded written proof of their alleged misconduct. 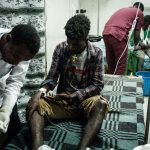