Tripoli – Libyan prosecutors ordered the culture minister detained on Wednesday as part of an investigation into alleged graft of state funds, a week after arresting the education minister in a similar case.

Prosecutors had questioned Culture Minister Mabrouka Touki and ordered her detained on charges of “falsifying official documents in order to complicate the processes of review and oversight of public spending,” it said in a statement.

This relates to alleged graft over a contract for maintenance works on ministry buildings which had already been refurbished last year.

Touki, an academic with a degree in nuclear physics, was appointed in March as part of the country’s interim unity government.

Her detention comes a week and a half after Libya’s Education Minister Moussa al-Megarief was arrested as part of an inquiry into a lack of schoolbooks.

The prosecution service said it was investigating possible “negligence” in that case.

Libya plunged into a decade of chaos following the 2011 revolt that toppled dictator Moamer Kadhafi, and state institutions are riddled with corruption.

The North African country was supposed to hold a presidential election last Friday in a United Nations-led effort to drag Libya out of its years of conflict. The ballot was delayed to an unspecified date after bitter arguments over divisive candidates and a disputed legal framework. 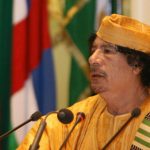 Libya since Gaddafi: A decade of civil war and chaos