Springbok scrumhalf Faf de Klerk admits there’s pressure on him to perform for the world champions after regaining his starting berth to face the All Blacks on Saturday.

“I’m feeling positive and privileged to be back in the starting lineup,” said De Klerk, who has come in at No 9 in a rotational switch with Jaden Hendrikse for the opening clash of the Rugby Championship in Nelspruit.

“I think there’s always been that pressure – we’re five nines in the camp now and Jacques [Nienaber] can pick anyone to play on the day to start. I don’t think we all play a similar game but we will do the job as needed.

“If you slip up once, maybe you get another chance; if you do it again, then you’re gone because the next guy is ready to go.

“If you’re experienced or a youngster coming through, it doesn’t really matter – you need to show it on the field.

“I quite enjoy big games and pressure, I think that’s where most of our guys play really well. So, it’s good to have that feeling so you know you need to perform.”

ALSO READ | De Klerk, Marx to start for Springboks against All Blacks

De Klerk is set to battle All Blacks rival Aaron Smith on Saturday at Mbombela Stadium where New Zealand will look to bounce back from a historic series defeat by Ireland on home soil.

The Bok halfback said: “We’ve become friends off the field but we know once you go on the field it’s back to business and he is one of their key players with over a 100 Tests, which makes him unbelievably successful.

“Playing against New Zealand for South Africa, there’s nothing more that you need when you run onto that field, whatever the situation may be. You know it’s probably going to be your biggest game of the year and you’re going to have to pitch up.

“You do need to man up physically against them and I don’t think there’s a lot of our guys [in the Bok team] who shy away from the physical battle, so I’m excited for that.”

On Malcolm Marx’s imminent 50th Test appearance for the Boks, De Klerk added: “I started playing with Malcolm when he was still a boy at the Lions … his ball-carrying and strength over the ball was always there but he wasn’t always the most accurate thrower when he started off.

“But he works so incredibly hard on it and I can’t remember when last he missed a lineout. His work rate and off-the-field work is immense.

“He’s a great guy and everyone loves him, he’s a big teddy bear but once he puts a Springbok jersey on he becomes an animal.

“Really proud of him … not so happy he’s overtaken me with the caps but it’s great for him and think he’s going to play a lot more Tests for the Springboks.” 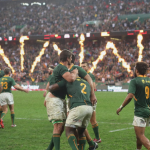