Kinshasa – Congolese President Felix Tshisekedi, who criticised the AstraZeneca vaccine for Covid-19 as inoculations began, received a first dose on Sunday and urged the nation to get jabbed too.

A source in the presidential office declined to say which brand of vaccine Tshisekedi had received, and said that the main thing was the “strong gesture” of having it done.

“The vaccine remains the best solution for now,” Tshisekedi told journalists after receiving the shot on Sunday evening along with his wife, Denise.

Congo President Félix Tshisekedi and his wife First Lady @DeniseNyakeru just got their first dose of the COVID-19 vaccine. https://t.co/lISPsW9BOP

“Having lost several relatives and loved ones, I am best placed to testify about the devastation caused by this pandemic,” he said.

Officials meanwhile confirmed the arrival in the Democratic Republic of the Congo of more than 250 000 additional doses of Moderna vaccine. Several thousand more doses of Johnson & Johnson, AstraZeneca and Pfizer vaccines are also due in the coming weeks.

In early July, already-widespread distrust of the vaccine increased after a statement by Tshisekedi about the AstraZeneca jabs.

“I think I was right not to be vaccinated. I asked for the opinions of other people, but they were divided. Some reassured me that there was no danger. But myself, I had doubts,” he told state television.

“There are other vaccines coming and you will see me get vaccinated,” he added.

The vast country of more than 80 million people had by then received 1.7 million doses of the AstraZeneca vaccine as part of the Covax global access initiative, but returned 1.3 million doses due to lack of demand.

Since April, more than 85 000 people have received at least one dose, with over 25 000 having received their second, official data show.

Policeman shoots student for not wearing mask in DRC 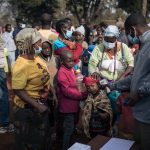