Soaring food prices are having dramatic consequences in Nigeria as many families are being pushed into poverty, with some failing to afford basic food.

Lagos – Nigerian nutritionist Emiolo Ogunsola stands in front of a dozen new mothers in a Lagos public hospital, listing the basic foods they need to keep their children well nourished: Eggs, vegetables and beans among them.

Her pitch is abruptly interrupted. For the mothers listening, even those essentials are increasingly beyond their reach.

“Ma, how can you expect us to buy that, everything is so expensive, there is no money to buy all that,” says one young mother with a child cradled in her arms.

Inflation is rising around the world as the global economy recovers from the coronavirus pandemic, and while Western central bankers say it is only temporary, the soaring prices are having dramatic consequences in countries like Nigeria.

Africa’s most populous nation with 210 million inhabitants, Nigeria competes with India for the largest number of poor in the world.

But battered by the double economic impact of low global oil prices and the pandemic, the World Bank estimates Nigeria’s soaring inflation and food prices pushed another seven million people into poverty in 2020.

Food prices have increased more than 22% since the start of the coronavirus crisis, according to official statistics.

For many people feeding the family has become a daily challenge.

“Every day, during consultation, there are five or seven children that suffer from malnutrition,” says Ogunsola, head of the nutrition department at Massey Street children’s hospital in a poor district in Lagos Island.

“I bet in a few months or a year, more children will be malnourished.”

Even before the pandemic and the surge in food costs, Nigeria’s nutrition figures were alarming: One in three Nigerian children suffered stunted growth due to bad diet; one in 10 is wasted.

As a result, close to 17 million children in Nigeria are undernourished, giving the country the highest level of malnutrition in Africa and second highest in the world.

Edith Obatuga has six dependents: two of her own as well as four nephews and nieces.

Twenty kilometres from Lagos Island, in Bariga Market, another popular area of Nigeria’s sprawling economic capital, this single mother shops around the stalls, hoping to find an affordable package of spaghetti.

She has already given up on beans, with the price per kilo already up by 60% in one year. She also cut portions of rice after a 15 percent rise in prices.

“During the lockdown last year, prices started to go up, and never stopped since. We cannot stand anymore,” says the 43-year-old mother who earns around 50 000 naira or $120 a month selling wood planks.

Obatuga has made adjustments to delay having to cut portions of food from the family meals. First, she left their apartment because she could no longer afford the rent and moved into her late mother’s old house.

“You should come when it’s raining, there is water everywhere, every night we fight mosquitos,” she says.

When her children fall ill, from malaria or typhoid, there is no longer any question of going to the hospital.

“Too expensive,” says the head of the household who now favours traditional remedies: a herbal juice prepared in a plastic container.

Before the pandemic, Nigerians were already spending 60% of their income on food, says Tunde Leye, an economist at SBM Intelligence risk consultancy. But inflation has pushed that higher on average.

“You can bet that today on average people spend more than 60%, maybe around 70% or 80%of their income on food,” the economist says.

“When people spend that much amount on food they cannot do nothing else, paying for a rent, health care, education.”

Indeed, after giving up on the rent for her house, Obatuga has also been forced to give up paying rent on her shop. She now sells her planks outside her house, far from commercial streets, and her turnover has fallen sharply as she drifts into the endless cycle of poverty.

Nigeria’s inflation is not driven by global factors alone. Each year 40% of Nigeria’s total food production is lost or wasted, according to the World Bank.

In Africa’s largest oil producer, corruption is endemic, roads are in dire condition, Lagos port is totally congested, and faulty electricity supplies do not allow food to be stored properly, economist Leye says.

Widespread bandit attacks, ethnic clashes and kidnappings for ransom in rural areas have added to a sense of “creeping insecurity”, which experts say has kept people from working in the fields in many agricultural regions of the country.

In the centre and the northwest, heavily armed criminal gangs terrorise local populations, looting villages, stealing livestock and kidnappings for ransom – even targeting schools and colleges for mass abductions.

Nigeria’s northeast has been at the heart of a deadly conflict between the army and jihadist groups for more than 10 years, forcing more than two million from their homes.

In these regions, the number of severely malnourished children is peaking, and in some areas has almost doubled in one year.

Lagos, the economic heart of the country, is hundreds of kilometres away.

But at traffic lights in the megalopolis, more and more children are from the north, clinging to car windows, their right hand outstretched towards the passenger. And the other brought to their mouths. 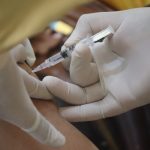