The EFF labelled them as “incompetent and useless”.

“The incompetence and arrogance of Eskom executives has plunged South Africa into a perpetual and unwarranted darkness that is killing businesses and livelihoods,” said the party in a statement.

“The collapse of Eskom and the failure to prove dependable and consistent energy supply are meant to render the country’s electricity utility redundant and useless,” it added.

The red berets said that their march to Eskom in February 2022 included the handing over of a memorandum in which a set of demands were made.

The party gave Eskom a period of 30 days to respond.

– The government must immediately fire de Ruyter, together with Oberholzer and the Board. We call for the firing of the board. The EFF warns that failure to fire Eskom’s board, CEO, and COO will require us to take more radical steps …. https://t.co/a7NSYIq5T5

The statement said that Eskom never responded, adding that the public utility had also failed to put in place practical steps to resolve the energy crisis.

The EFF warned that more radical steps would be taken if Eskom’s board, De Ruyter and Oberholzer were not relieved of their duties.

“The EFF warns that failure to fire Eskom’s, CEO and COO will require us to take more radical steps to ensure that competent, dependable, and fit people are in charge of Eskom to resolve the energy crisis and bring an end to blackouts that have become a permanent feature of our lives.”

The party gave their input with regards to a long-term solution.

“Sustainable and practical long-term solution to South Africa is balanced energy mix that include state-owned and control generation through nuclear, renewable, coal and other sources,” said the EFF. 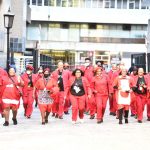 ‘Not even inspectors can walk randomly into workplaces without justifiable cause,’ labour dept says