Lilongwe – Malawi on Friday deployed armed soldiers to escort fuel deliveries after a sit-in by truckers caused shortages at gas stations around the country.

By Thursday morning, most gas stations in the country’s capital Lilongwe had run out of fuel, sending motorists into a panic.

Malawi imports its fuel from ports in neighbouring Tanzania and Mozambique. The army said soldiers are now accompanying tankers from border posts to the depots, and on to gas stations.

The military “appeals to the members of the general public to avoid interfering with the operation,” the military said in a statement.

“The Malawi Defence Force will carry on with the exercise until the situation normalises.”

Fuel tanker drivers have been on strike since Wednesday, and gas stations quickly started running dry.

“What is most worrying is that some of the drivers are engaged in violence against other drivers, which is criminal. We ask the drivers to comply with laws as they continue staging their strike,” he said.

Kazako urged the striking truckers not to block roads.

The government recently raised the minimum salary for truckers to 140 000 kwacha ($170) a month, but the drivers say companies have yet to actually increase their wages. 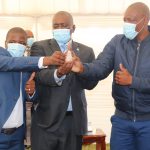