In Hong Kong, the Hang Seng Index was up 1.02%, though Tokyo dipped into negative territory.

After a rollercoaster ride since Omicron first emerged last month, investors are now optimistic about the outlook in the run-up to Christmas.

Drugmakers BioNTech and Pfizer have said a third shot of their vaccine is effective at guarding against the new strain, while a two-dose regime will leave Omicron “not sufficiently neutralised”.

Patrick J. O’Hare at Briefing.com said the emerging information about the variant was likely to turn the market’s focus back to the shift in monetary policy by the US Federal Reserve.

“After all, if Omicron isn’t going to be the pernicious force some first thought it could be, then economic activity should continue to run at a pretty healthy recovery pace that makes it clear the Fed’s policy rate should not be hanging out much longer at the zero bound,” he said.

With a Fed policy meeting looming next week, investors will be focused on Friday’s US consumer price index data as the central bank has signalled its concern about rising inflation, which could lead to multiple rate hikes next year.

“We are looking to potentially have a rise in volatility even if the market continues higher around those events next week,” said Frances Stacy, Optimal Capital portfolio strategist, on Bloomberg Television.

“Many of the catalysts that gave us this boom out of Covid are slowing. And then you have the Fed potentially tapering into a decelerating economy.”

In mainland China, Shanghai and Shenzhen were up.

Jakarta, Singapore and Seoul were also marginally up, while Wellington was slightly down.

Even an ongoing debt crisis in China’s property sector did not appear to be denting confidence.

On Tuesday, real estate behemoth Evergrande missed a deadline to repay some of its overseas creditors, raising the prospect of a default as it prepares for a government-backed restructuring.

The next day, another property firm Kaisa suspended trading just before the opening bell.

“Now it seems as if markets have just accepted that Evergrande could collapse and there is no panic.”

On Wednesday in New York, the broad-based S&P 500 gained 0.3 percent, helped by the BioNTech and Pfizer statements on Omicron. 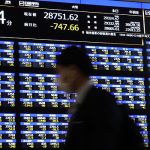 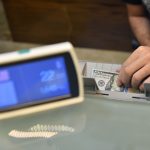