Cape Town – Nigerian musician Davido, real name David Adeleke, has shared a hilarious screenshot from a Snapchat conversation he had with his 4-year-old daughter Hailey Adeleke.

The If hitmaker took to social media to share a humorous screengrab of a conversation between him and his daughter where they exchanged pictures of them with their eyes turned away.

“Me and my daughter have the funniest relationship,” Davido captioned the screenshot.

According to KemiFilaniNews, the picture can be referenced back to a popular childhood play where children get to turn their eyes while talking to each other and looking in another direction.

Many kids involve in such play, and there has always been a misconception that when a fly touches a person’s eyes, it might not close again.

Hailey is not the Afrobeat star’s only child.

The musician, according to GlobalTimesNG, always tries his best to be there for all his children no matter the differences between him and their mothers. 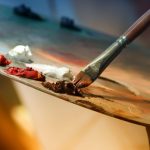