Mswane took to social media with glee, sharing photos and videos of her new car.

“The best or nothing” @mercedesbenzsa words cannot describe how absolutely excited I am to drive my new baby! A million thank yous,” she wrote in an Instagram post.

As the winner, the KwaZulu-Natal beauty queen and law graduate received R1 million in cash and R3 million in sponsorships and prizes, including the use of a fully furnished and serviced apartment at the luxurious Central Square Sandton, with fabulous interior décor by Vursa, and a Mercedes Benz C-Class Sedan for the year of her reign, according to Channel24.

When bought brand-new, the Mercedes C-Class sedan is priced at R880 932.62, according to The Citizen. 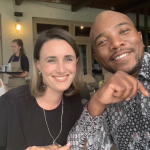 ‘I’m ready to bring my A-game,’ says Somizi as he returns to TV with ‘Lovey Dovey’